Home Blog Remember That Time Ferrari Made A Twin-V8 Speedboat?

Remember That Time Ferrari Made A Twin-V8 Speedboat? 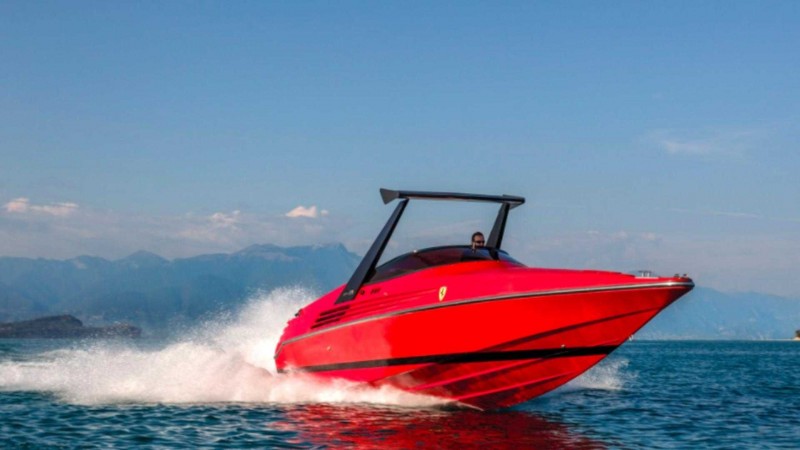 If we told you that a certain 1990 Ferrari could only muster a paltry 62mph, chances are you wouldn’t be interested. But what if we told you it was a boat?

Yes, Ferrari did boats. Back when double denim was the order of the day and successful businessmen employed full use of their septum, Ferrari teamed up with Riva to produce 40 speedboats draped in Ferrari’s signature Rosso Corsa red.

As you would expect from such a collaboration, the 1990 Riva Ferrari 32 Speedboat offered plenty of power. Two 7982cc, 390hp V8 Vulcano 400 engines worked in tandem to skip across the murky blue at speeds up to 62mph; impressive considering Super Yachts of the day could barely muster 40mph at full pelt.

In keeping with Ferrari’s sporty yet luxurious land-bound mantra, the cabin was sprayed with decadent touches for utmost comfort, while the sleeping quarter boasted more indulgence than most boudoirs.

As far as powerboats go, this is pretty exclusive. The carbon-fibre spoiler didn’t quite catch on within the world of pleasure cruising, nor has the screaming red paint scheme, but nothing showcases wealth quite like cruising around in a Ferrari-powered boat.

At 32 meters in length and boasting riotous engine noises even Poseidon himself would be proud of, you are sure to draw spectators whichever marina you frequent.

With such provenance and rarity, you would imagine that a 1990 Riva Ferrari 32 Speedboat is worth more money than MC Hammer currently owes the IRS, yet you would be wrong.

The 28th example made during the limited production run, having been piloted for only 78 hours in its lifetime, sold for €80,640 during RM Sotheby’s Monaco auction back in May 2016.

Pushing 30 years old, it seems the Ferrari/Riva machine remains adrift in the value trough as an out-and-out oddity within the elitist world of performance boat ownership.