Home Blog SHOULD AN AMG SEND ITS POWER TO TWO OR FOUR WHEELS?

SHOULD AN AMG SEND ITS POWER TO TWO OR FOUR WHEELS? 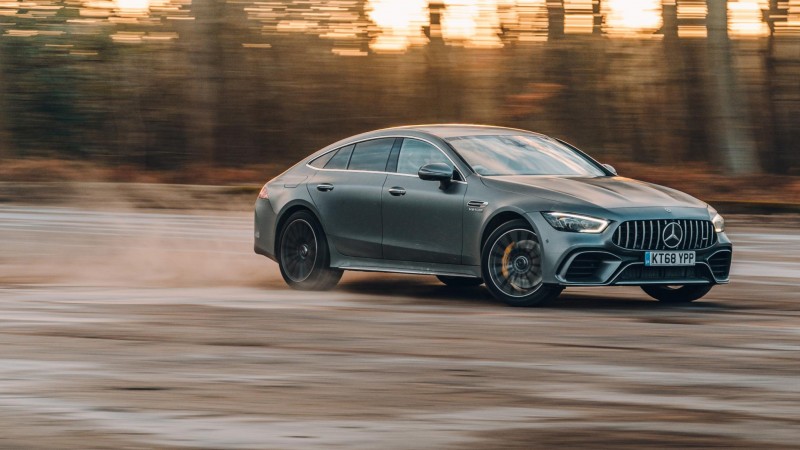 Having spent 46 years engineering cars that bonfire their rear tyres, it’s amazing that in just seven AMG has managed to do the exact opposite, turning the tide on traction thanks to the adoption of one innovation: four-wheel-drive.

Hardly ground-breaking technology, right? But Merc’s go-faster arm was very late to the AWD party, hesitantly dipping its toe in the four-wheel-drive water back in 2013 with the A45.

“Sacrilege!” enthusiasts (and people with shares in tyre companies) angrily shouted through gritted, yellowed teeth. And they had a point, it wasn’t an interesting 4WD system. It wasn’t playful yet traction-scrambling like you’d find in an R35 Nissan GT-R. Rather more of a chastity belt for big skids. Which – up until then – was AMG’s raison d’être.

Things have moved on though. As the clever folks in Affalterbach have bashed their heads together and finessed their four-wheel-drive system to garner the true benefits of traction: blistering speed. Case in point, the AMG GT 4 door.

The luxo thug’s front and rear wheels talk to each other so fluently that the traction light barely flashes – even in the recent torrential downpours – so you can cover ground in any condition at a ballistic pace. During Storm Ciara, Dennis and whatever’s next, you’d expect the yellow skiddy light to be flashing at the rate of a hummingbird’s wings, but it doesn’t. Instead, the computers work out whether to send power to the bow or stern, and how much to distribute to the port and starboard (as it’s got torque vectoring), meaning you can use pretty much all the 631bhp and 627lb ft of torque on tap whenever you like.

But that doesn’t mean you can’t have some fun. As – thankfully – AMG hasn’t forgotten its roots and you can turn the traction off, disengage the front wheels and light up the rears. And you should… it is an AMG after all.

To make that happen, all you have to do is make sure the engine and gearbox are warm, select race, turn ESC off, pull both gear paddles, then the right one to confirm and – boom! – you have an invite to be a rear tyre arsonist. It’s really quite amazing how a few button pushes and paddle flaps can undo all those years of hard work trying to harness traction, as instantly the car regresses back to a Neanderthal state of AMG and spins its wheels up everywhere. Which isn’t a surprise given it’s got one of the most powerful engines from AMG ever under the bonnet, plus two turbos to give you crazy torque at low rpm.

Beware though: there’s no safety net in ‘Drift Mode’. None. So you need to know what you’re are doing or have plenty of space. But when you do get it dancing, it’s a proper smoker and wonderfully adjustable. With such a long wheelbase, dollops of grunt and quick steering, it’s good enough for a slot in Formula D. And would be the most luxurious car on the grid. So, recently on the James Bond cover shoot, we couldn’t help but spend some time skidding about. Because that’s what AMGs are about. And safe to say, there’s no denying deep down this is a true AMG and a proper grin giver. So don’t sell your tyre company shares just yet.