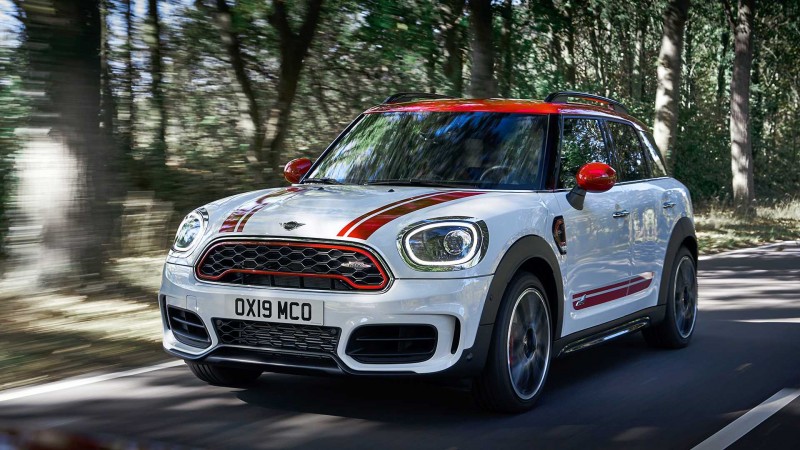 Mini has teased us for a while with hopped-up JCW prototypes for the Clubman and Countryman testing in public. The wait is now over, as Mini dropped the curtain on its latest John Cooper Works variants for both models. Fans of speed and power will have much to cheer about, but the save the manuals crowd will have another death to mourn.

The big question is, naturally, how much power is under the hood? As expected, both the JCW Countryman and JCW Clubman get an amped up 2.0-liter TwinPower Turbo mill as seen in select BMW models, generating 301 horsepower (224 kilowatts) and 331 pound-feet (449 Newton-meters) of torque. That’s a substantial jump from the current JCW twins, but perhaps more substantial is the standard-issue eight-speed Steptronic automatic, which now serves as the only gearbox available.

Yes the manual is gone, but with the extra power on tap going to all four wheels, Mini estimates the JCW Clubman can nip to 100 km/h (62 mph) in 4.9 seconds with the slightly bulkier Countryman covering the spread in 5.1 seconds. That’s not slow by any means, and Mini is quick to mention the paddle shift manual mode for those desiring direct control of the cogs. By comparison, both models are well over a second quicker than the outgoing versions, and top speed is electronically limited to 155 mph.

The new JCW-trimmed models offer more than just a snarling engine. Mini says both the Clubman and Countryman get a re-engineered chassis with added reinforcement throughout. The result is increased rigidity all around with better camber for the front wheels. A trick differential at the front axle further assists cornering, and when it comes time to stop there are bigger four-piston calipers at the back with 14.1-inch rotors up front. Mini also says the new JCW twins were extensively track-tested, and as such, the engine and transmission have upgraded cooling systems designed to keep temperatures from going critical.

Aesthetics wise, JCW models get special 18-inch wheels as standard with 19-inchers optional. Also optional is a two-tone contrast paint scheme for the roof and mirrors, but all models get the requisite JCW badging and honeycomb treatment with red trim for the grille. New standard-issue LED lights shine the way front and rear, with the taillights also getting the cool Union Jack treatment. Inside you’ll find a bevy of standard kit including the 6.5-inch touchscreen display and Mini’s Integrated Connected Media equipment. Sport seats, a sport steering wheel, a special selector lever, and an anthracite headliner are also part of the JCW treatment.

Pricing and availability for the new 2020 JCW Clubman and 2020 JCW Countryman will be revealed at a later date.