Home Blog This Living Room Houses A LaFerrari, 599 GTO, And A Veyron

This Living Room Houses A LaFerrari, 599 GTO, And A Veyron 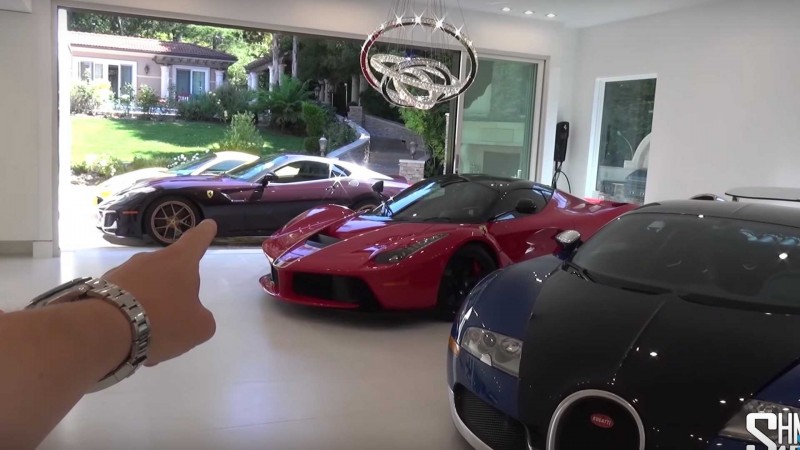 While most people would have to come to a compromise when it comes to designing the living areas of a brand new house, those who can afford to take things to another level tend to prioritize their passions and hobbies. More so if you are a collector of supercars and hypecars. While some may have airconditioned garages and underground structures, Instagram personality FerrariDrive keeps things simple: the living room is a garage for his collection of awesome automobiles. YouTube automobile sensation, Shmee150 , takes us on a tour of his collection in the video above.

How often do you get to see a Veyron parked next to a piano and fireplace in a living room? Not often at all. Even more so when you have a Ferrari La Ferrari and a Ferrari 599 GTO next to said Veyron, all neatly occupying part of a fancy house in Silicon Valley in California. Shmee150 was invited by FerrariDrive for lunch and a quick tour of his collection, and Shmee isn't the type of person to pass up a cool find, filming this quick segment as part of his currently running USA tour. The Veyron seen here is the fifth one ever made, and is part of the first batch of cars for the United States. The La Ferrrari is one of 499 made (500 plus the extra one), and is neatly parked next to the Ferrari charging plug for the hybrid system. But our favorite is the spec of the plum colored 599 GTO outside, complete with brushed trim pieces and gold wheels. There's even a limited run Ferrari 458 Speciale Aperta, with yellow paint and unique blue striping and mirrors, direct from the Taylormade bespoke option catalog.

As an extra bonus, Shmee150 is taken for a quick ride in the 599GTO, then he gets to drive the car himself for a bit; there aren't that many sounds in the world that come close to the exhaust note of a naturally aspirated Ferrari V12.