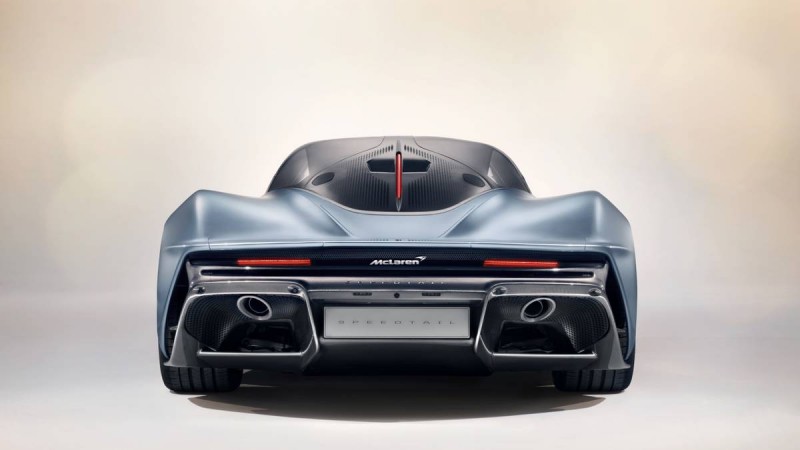 The 600LT, the Senna, the P1 … McLaren just keeps cranking out the sports cars. Its latest, the Speedtail, is a 1,035-hp gas-electric hybrid the company says is its most extreme car yet.

With that kind of speed, aero tuning was definitely a priority, and the company says every aspect of the Speedtail’s design is to reduce drag and maximize top speed. For example, the Speedtail is slightly narrower and longer than the McLaren's last hybrid, the P1, and it's shaped like a teardrop –- the fastest shape in nature. The vertical ducts beneath the LED headlights are particularly slender to minimize drag while still feeding sufficient cooling air into the low-temperature radiators (LTRs). Airflow that doesn’t enter the LTRs is directed over the top of the car and into two intakes. From here, it’s ducted through the body and around the wheel arch before exiting out of the lower door vents. The idea is to reduce air volume traveling around the sides, cutting turbulence.

The car rides on Pirellis developed specifically to handle the speed. The body is carbon fiber, the suspension is aluminum and the brakes are carbon ceramic. McLaren even sourced lightweight leather. It all helps minimize weight, and McLaren says the Speedtail weighs just 3,153 pounds dry.

The Speedtail pays homage to the F1, built from 1993 to 1998. Like that classic, the Speedtail has three carbon-fiber seats, one in the center for the driver and two on either side, set slightly rearward, for passengers. Also, like the F1, the Speedtail is rare: Just 106 are planned for production -- the same number of F1s that were built. A design element unique to the Speedtail is that the starter button location and the controls to open the windows and doors are in panels above the driver’s head.

You probably figured out by now that all Speedtails are already reserved, starting around $2.1 million. McLaren says deliveries from Woking, England, should begin early in 2020.

U.S. buyers have a few extra hoops: Our safety regs don’t allow the seating layout, nor the retractable high-def digital cameras that replace door mirrors. So McLaren says any Speedtail coming here has to be imported individually under the Show or Display rule, limiting driving on public roads to 2,500 miles a year or less. That said, McLaren figures about a third of Speedtail production is headed here.

The Speedtail is the first of 18 new cars or derivatives McLaren is introducing as part of its Track25 business plan announced last July at the Goodwood Festival of Speed. That plans calls for 18 new models between now and 2025, when the company says it’s going to be producing nothing but hybrids.