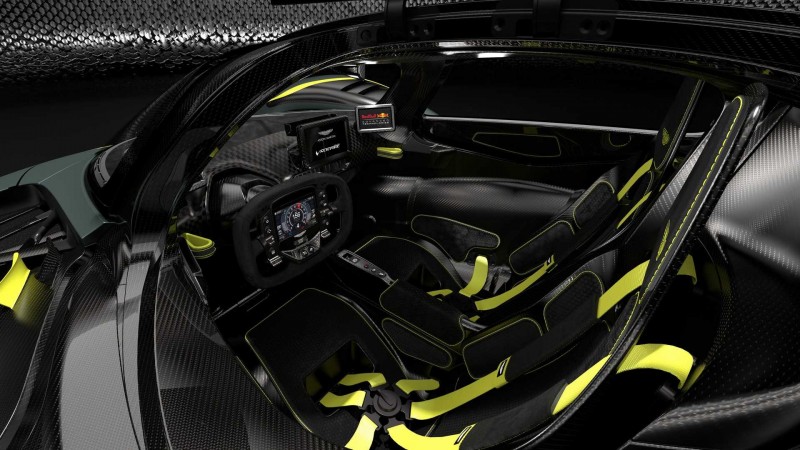 Leave it to Aston Martin to take its already extreme Valkyrie hypercar and give it an array of upgrades to shave off tenths of a second around a circuit. Optionally available for those 150 people fortunate enough to claim the Cosworth-engined beast, the AMR Track Performance Pack bundles an aero-optimized front clamshell boosting downforce and efficiency.

We’re just barely scratching the surface as the kit also encompasses a full set of exterior body panels designed to improve the car’s performance around a track. Not only that, but the Valkyrie gets titanium brakes for ultimate stopping power, and these are matched with matte black magnesium wheels and a special setup of the suspension tailored to track use. Rounding off the upgrades are the carbon fiber wheel discs to slash drag furthermore.

Based on the estimations made by Aston Martin, the Valkyrie fitted with the AMR Track Performance Pack is eight percent faster around a circuit than the standard car. There’s just one issue – all the extra goodies have been specifically designed for track use, so you can’t drive the car on public roads with the optional package installed. The good news is the components can be interchanged with the standard road-legal parts, which means you won’t be stuck with a track-only Valkyrie.

Aside from introducing the AMR Track Performance Pack, Aston Martin is also showcasing three AMR livery designs: Spirit (silver car), Mantis (green car), and Ultimate (black car). For those not entirely happy with how the Valkyrie looks with any of these special finishes, the company’s “Q” bespoke division will customize the cars to perfectly suit the owner’s preferences.

Sky’s the limit when it comes to personalizing a Valkyrie as even a 24-carat gold leaf livery can be added underneath the paint lacquer. There’s also something called “carbon jewelry” part of the optional Mokume Carbon Fiber pack beautifying the inner scoop of the headlights and sidepod vanes on the outside, while in the cabin it can be applied to the armrest, central air vent and on the steering wheel.

Aston Martin has also set up a virtual reality experience (as seen in the video below) for the owners to admire their future prized possessions before actually taking delivery of the hypercar developed together with Red Bull Advanced Technologies.