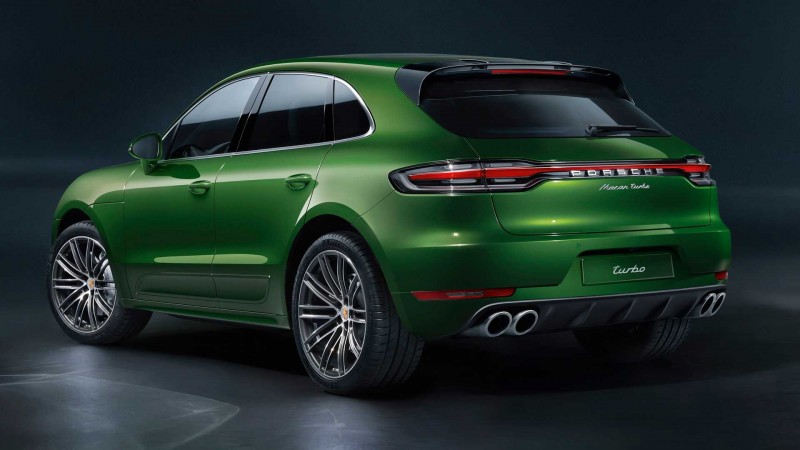 If there’s one rule when a redesigned Porsche arrives, it’s that it won’t be long before additional variants launch. That’s held true with the Porsche Macan, which debuted in both standard and S guise. Today, we get our first look at the new Turbo.

Of course, both versions of the Macan were already turbocharged, but this is the Turbo. That means a twin-turbocharged 2.9-liter V6, borrowed from the Panamera  and Cayenne, sits in place of the turbocharged 3.0-liter V6 found in the Macan S. Engine size might be down, but power is up from 348 to 435 horsepower. Torque, meanwhile, climbs to a robust 406 pound-feet from 354 lb-ft. The extra power means extra performance, with the Macan Turbo with the Sport Chrono Package hitting 62 in just 4.3 seconds and can carrying on to 168 mph. A seven-speed dual-clutch transmission channels the power to a standard Porsche Traction Management all-wheel-drive system.

On the agility front, the usual options apply. An adjustable air suspension is available (it features "optimized rolling pistons and new shock absorber hydraulics"), as is Porsche Torque Vectoring Plus and carbon-ceramic brakes. Unlike other Macans, the Turbo comes standard with Porsche's neat Surface Coated Brakes, which feature a tungsten-carbide coating that Porsche says reduces dust by 90 percent, increases responsiveness, and cuts down on wear.

Performance is a good reason to buy a Macan Turbo, but there are also some tweaks to the crossover's style (previewed in spy photos). There's a more aggressive front fascia that's better suited to feeding the new engine, while a new low-key wing at the back adds some spice to the Macan Turbo's tail. We're particularly digging the latter element, which is a perfect balance of sporty and special without feeling shouty or overdone. 20-inch wheels come standard, as are Sport Design style elements on the side skirts.

While Porsche typically demands a healthy premium for its Turbo models,($25,000, in this case) there's a commensurate increase in standard equipment to go along with the extra power and performance. That's true with the Macan, where customers can find 18-way sport seats with standard leather upholstery, an Alcantara headliner, and a sport steering wheel inspired by the 911. Like other Macans, though, a 10.9-inch touchscreen infotainment system sits front and center offering customers standard Apple CarPlay and Android Auto compatibility. A 14-speaker Bose audio system is also standard.

Prices for the 2020 Porsche Macan Turbo start at $83,600 before the $1,350 destination charge hits. Expect sales to kick off later this year. Expect more, including additional photos, when the Macan Turbo arrives next month at the 2019 Frankfurt Motor Show.