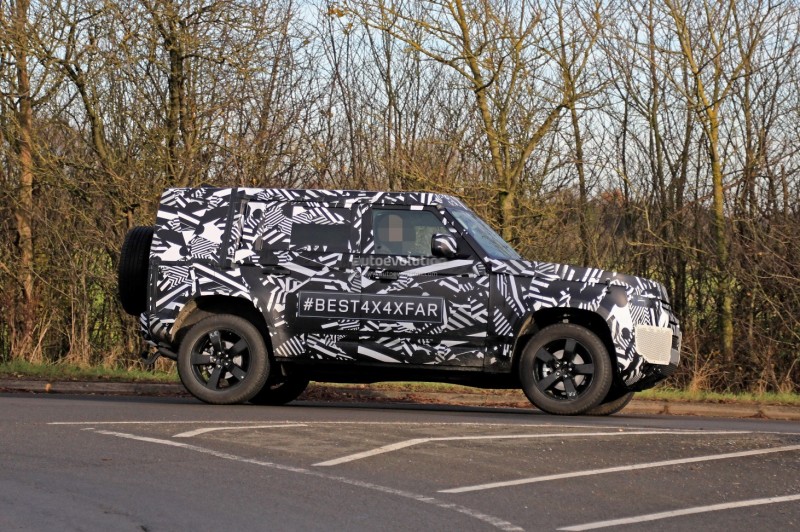 Caught by the carparazzi as a development prototype with tons of camouflage and cladding, the square-shaped, wagon-esque SUV features #BEST4X4XFAR decals on the doors and tailgate. We’re not so sure about this claim considering the Defender is going unibody, leaving the body-on-frame design of the predecessor to the annals of Land Rover history.

Three- and five-door models are in the pipeline, and for the United States of America, we’re expecting a sport utility truck that would rival the likes of the Jeep Gladiator. But being unibody, the Defender Pickup won’t be capable of towing as much as the workhorse with Wrangler styling.

Spied testing on Irish roads, the 2020 Land Rover Defender features a side-opening tailgate and a full-size spare wheel from Continental that obstructs rearview visibility. The prototype also shows two exhaust pipes on the left-hand side of the vehicle, along with lots of suspension components made from high-strength aluminum alloys.

The next chapter in the story that started in 1948 with the Series I should premier towards the end of 2019 for the 2020 model year, sporting an assortment of four- and six-cylinder engine options. A plug-in hybrid similar in setup to the P400e in the Range Rover will be introduced at some point in the future. A mild-hybrid system like the one which premiered in the Range Rover Evoque is also certain to happen.

When Land Rover presented the Modular Longitudinal Architecture, the British automaker also confirmed that it’s possible to implement an all-electric powertrain. Whether this means the Defender EV will ever happen as the off-road brother of the Jaguar I-Pace, only time will tell.

By fiscal year 2024, Jaguar Land Rover confirmed the introduction of “two additional nameplates,” which could come in the guise of the F-Type's replacement and the J-Pace sport utility vehicle. Another candidate is the Road Rover, which could become the first-ever Range Rover with an all-electric powertrain.